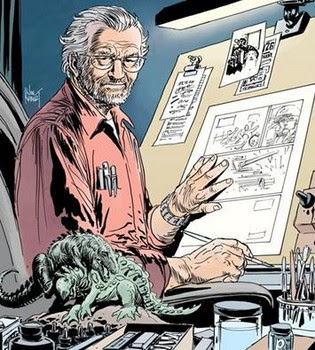 The world has seen last of Tor in his wolrd a million years ago.

Because Tor's creator Joe Kubert, another comics-art legend, passed away, joining Frank Frazetta, Al WIlliamson, and Roy Krenkel in the great beyond.

To most people reading this, it will be old news; I first found out this sad message while speaking with artist and writer (and Savage planet co-creator) Dan Parkins at the 2012 Dum-Dum this year. It turned out that Joe passed away on Sunday August 12 (which happened to be my birthday), while I was visiting my uncle's house in Pueble Colorado, en route to the the convention in L. A.

Although most of us knew ths was coming, as Kubert was in his mid- eighties, it came as a shock nontheless. I'd just had a recent transaction with Joe less than a month ago. I had only just completed a correspondance course in inking from the Joe Kubert school of art. I had never been able to attend the actual school, since my folks suggested that I go into teaching. But I was able to take a penciling course, and later, one in inking. Joe was nice enough to go over each students' art lesson, and make corrections personally; I was fortunate enough to get an original Kubert-inked pteranodon drawing out of the penciling course. But as for the inking course, I had completed all but the final lesson; I was looking for a job at the time, and when I did find one, I was so caught up in it that I didn't finish.
Until this past summer that is. It seemed I had somehow lost that materials and instruction; but Kubert school was kind enogh to send me xeroxed copies of the final lesson. It's completed now, along with Joe's excellent feedback!

Joe Kubert and Russ Manning with the two artists a remember the most fondly growing up with. Kubert's Tarzan stories, which he did for DC in the early 1970s were among his best work; they share a quality with Tor, his iconic Cro-Magnon hero, in presenting Burroughs' character as a lone wanderer who inate sense of justice manages to prevail over the cruelty he encounters among the lost cities and tribes he is continually discovering.

Thanks, Joe, for everything, including a lifetime of incredible lost-world adventures. You will be sorely missed.