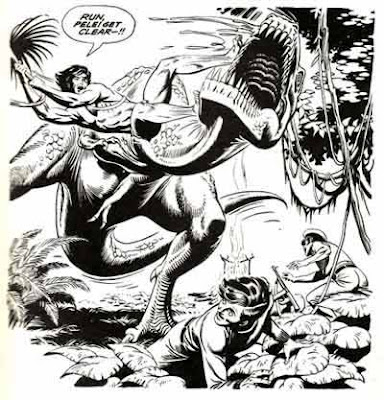 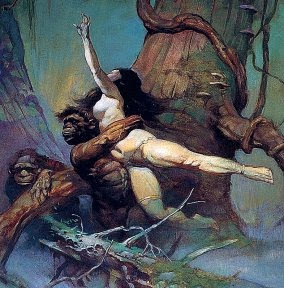 Caspak is another Lost World setting created by ERB. Unlike Pal-ul-don and Pellucidar, there were no crossovers to any of the other Burroughs series. The Caspak series was a trilogy consisting of just three novels, The Land that Time Forgot, The People that Time Forgot, and Out of Time’s Abyss.

Caspak is a huge island or small continent located in the South seas somewhere between South America and Australia. Unlike Pal-ul-don, for example, lifeforms on Caspak have literally remained unchanged from their myriad eras. However, what makes Caspak unique, is that is actually a huge cross-section of earth’s prehistoric history, a living record of life on earth from the Cambrian up to the early Holocene(which marked the beginnings of human civilization.) 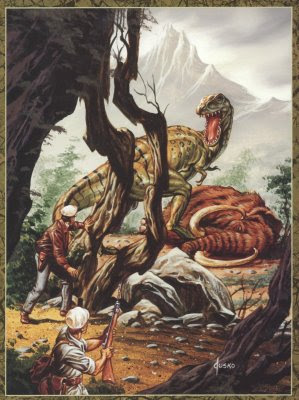 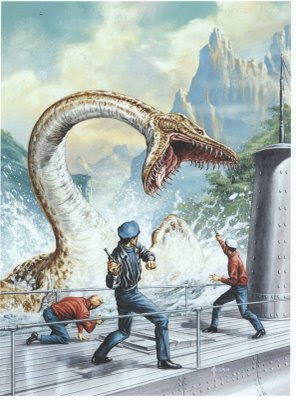 Unlike Pellucidar, which is actually a huge melting pot of earth’s various ages where all types of ancient fauna and flora intermix, the fauna and flora of Caspak is organized into different zoogeographic zones, where fauna from the different respective ages are confined. Giant amphibians and insects such as the giant dragonfly Megamueria are confined to the southern extremity of the island. Reptiles and dinosaurs dominate slightly further north. The lagoon in this region is infested with huge aquatic saurians, “a veritable Mesozoic nightmare”, according to Bowen Tyler’s journal. Pterodactyls ply the misty skies, and dinosaurs such as the Jurassic diplodicus and allosaurus overrun the land. Further north, the mammals begin to dominate, beginning with the most primitive types, and upward through the late Pleistocene fauna, including aurochs, mastodons and giant sloths, preyed upon by cave bears, saber-tooth cats, and giant panthers. Primates are thick throughout the island, including “monkeys of all sizes and shades”, and a variety of apes and man-like creatures.

There are beasts from all ages on Caspak. Among the ones mentioned are the Plesiosaurus which ambushed the U-boat in first novel, the colorful allosaurus encountered shortly afterward, the giant herbivorous diplodocus, and the giant pterodactyls. Later in the novels are mentioned the hyenodons, the aurochs the mastodon, the sabertooth, and the cave bear. At the north end of the island, more contemporary fauna is found, including horses similar to the Asiatic Prewolski’s horse, which is tamed by the Galu, the highest type of human. The only beasts whose name in the native language is mentioned are the giant pterodactyls, which are known as jo-oos, and the ecca, the name for the dimunitive eohippus, or dawn-horse. 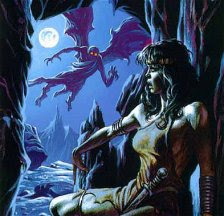 There are a number of races on Caspak, virtually all of them types of human that actually existed during the earth’s past. The most primitive, the Alus, are found in the southernmost portion of the humans range, They stand erect, but are fur-covered, and otherwise very apelike, possibly corresponding to the Australopithecus Africanus ancestor of man. The Bo-lu, the next most primitive, may correspond roughly to Australopithecus Robustus, a slightly higher form. Both these employ blunt sticks or clubs as weapons. The next highest, the Sto-lu, are also known as the “hatchet people”, because they are able to make crude stone hatchets. They are still somewhat ape-like, but nearly hairless, proabally of the same species as Homo Erectus. The Band-lu, who have “better-shaped skulls”, according to Billings, are probably synonomous with the Neanderthal man, although Billings believes them to be a Cro-magnon type. Cro-Magnons, actually were indistinguishable from modern humans, other then being “cave people”. The next highest, the Kro-lu, are more advanced, and have forted villages, and domesticated stock, including goats, and domestic dogs. The highest type, the Galu reside at the northmost portion of the island. They are physically identical to the Kro-lu, but higher in technological development, showing the beginnings of true civilization. They have invented cloth-weaving, bows and arrows, and have domesticated and bred horses. But the most striking aspect of the Galu race is a unique element of their reproductive cycle. Galu women bathe in special ritualistic pools. During this time, they release clusters of eggs which drift on the current to Southern region of Caspak where they develop into the most primitive lifeforms, thus recycling the entire chain of life on this remarkable island.

One other race is native to the island, an entirely fictitious one invented by Burroughs. These are the Weiroos, a race of winged humans that consists entirely of males. They have dead-white skin, and goggling eyes, which lends them an eerie death-like appearance. They can see in darkness as well as a cat. It is uncertain entirely bizarre race came about. The Weiroos seem to regard themselves as the highest race on the island, but they seem to have originated, not from the Galu, but through some freakish off-branching in the Caspakan chain of human evolution. The Weiroo exist on an island in the center of a lake, in a city constructed entirely from human skulls. They prey on the women of Caspak’s human races. The young born to female captives of the Weiroo is always male, showing no characters of their female parent.

Caspak has been represented twice in the movie adaptations of Burroughs first Caspak novels during the seventies. Both adaptations are fairly good, compared with the many other adaptation of Burroughs work. The first move is a decent adaptation of Burroughs novel, following the story fairly closely. A variety of prehistoric reptiles are depicted by sophisticated (for their time) rod-puppets, and a few life-sized mockups. These include pterodactyls, plesiosaurs, mososaurs, allosaurus, tyrannosaurus, a pair of styracosaurus, and even a polacanthus (a pike-backed herbivorous dinosaur). The story ends with the island being seemingly destroyed, or at least damaged, by a volcanic holocaust (a staple of lost-world romance). As in Burroughs novel, Bowen Tyler and Lys La Rue remain stranded on the island in the windswept northmost portion, and cast their record into the sea. The next movie adaptation, The People That Time Forgot, follows an expedition seeking to locate the missing Bowen and Lys. The film is a fair effort, but not nearly as good as the first one. The prehistoric creatures featured in this film include a museum-quality, but very stiff-looking pterodactyl which attacks their plane, a less-convincing life-sized stegosaurus, a couple of very fake-looking ceratosaurs, and a better-looking gorgonops (a saber-toothed proto mammal), and scutosaurus(a species Triassic pariosaur), both of which seem to have been copied from the paintings of Zednek Burian. Though the Weiroo race comes into play near the end of Burroughs novel, the creation of a convincing race of winged people was beyond the technology of the time, and a race of humans similar somewhat to Burroughs Galu, with a faintly oriental samarai-ish culture, but with a city of skulls, similar to the Weiroo. Some Frazetta posters were used as part of the background scenes. These seemed to fit the atmosphere, but were jarring to anyone who recognized them. The third and final Caspak novel, whose action centered around the Weiroo race, was never filmed for obvious reasons. 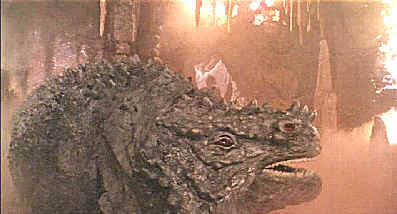 Comic legend Russ Manning took Tarzan himself to Caspak in a series of two excellent graphic albums released during the seventies. These were called Tarzan in the Land that Time Forgot, and Tarzan and the Pool of Time respectively. The former was released in Great Britain, the latter in Swden. Dark Horse released both stories in single package in the US during the nineties. It was an excellent move, getting these stories out to where many fans had missed them (wish they’d done the same with Manning’s other European graphic novels while they were at it), but the coloring, like most of the Dark Horse reprints, was not nearly as good as in the originals. It was better than in the Dark Horse prints of the Dark Horse comics, though, where even Tarzan’s skin was darkened.
Posted by Sweet One at 8:33 PM