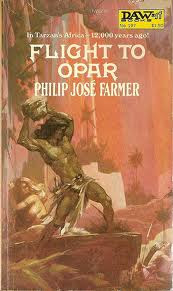 Some have opined that ERB's "universe," and most particularly Tarzan's Africa, represent an alternate reality. Of course, ERB and others wrote in a time before the term "alternate history" had been coined. The "alternate history" genre seems to have had its genesis in the novel The Wolves of Willouby Chase by Joan Aiken, who wrote a Dickensian series of novels that took place in an alternate England, in which King James III was never deposed, and wolves have migrated to Britain via a Channel tunnel (rather than merely survived from Arthurian times). More recent novels of alternate history focus on such questions as : what if Rome never fell? What is the South had won the Civil War? What if aliens had become involved in WWII ? What if the newly discovered Americas had been inhabited not by native human tribes, but by Homo Erectus? Those last two examples are derived directly from the novels of Harry Turtledove, a veteran of alternate historical fiction.

Such writers as ERB and Conan Doyle didn't set out to write alternate history. Burroughs wrote in an era when life on Mars and Venus and even the moon seemed higly probable, however wild their speculations were. But as time has passed, Burroughs novels could easily be classified as such today. The locale for Doyle's Lost World actaully exiists but no prehistoric fauna exists there; Robert J. Sawyer's novel Dinosaur Summer speculates on how history might have preceded had Conan Doyle's story been fact (among other things, the movie King Kong, was a flop!).

As far as Burroughs' Africa goes, he seems to have been drawing on the mythic "Dark Continent" of Western cultural imagination, which in fact, Tarzan's Africa resembles the most. For one thing, the Congo appears to be far more extensive than it on our earth, and the savanna lands, which make up the bulk of the Africa we know, correspondingly smaller. It is generally assumed that Lord and Lady Greystoke were stranded on the coast of the Cameroon; however the first novel suggests that the locale is far south of the there, where technically there should be no jungle.

Another difference is in the fauna. It is fairly obvious that the Mangani are a speciesof great ape absent in the Africa we know. Just what are the Mangani? Most depictions of them resemble the chimpanzee the most closely, but are larger. Like chimps, the Mangani are aggressive, omnivorous creatures. They seem to be considerably more inteligen than any known ape species, and even havea language. However, this last may or may not set tham apart, as other primates such as the Bolgoni (gorilla), and even the Manu (monkey) seem to comprehend and speak the same tongue in Burroughs' Africa, which merely sounds like animalistic gibberish to humans. And speaking of the Bolgoni, the gorilla of Tarzan's Africa seems to be of a more aggressive disposition (and also omnivorous). This corresponds to what was then known (and feared) about gorillas by European explorers, but has little to with what has since been learned. There is also no mention of the chimpanzee (and their smaller, less aggressive cousins, the Bonobo, or pygmy chimps) in Burroughs novels. The bonobo may not have been officially recognized at the time, bu Burroughs may have intentially cosen to eliminate the chimpanzee from his version of Africa. I wrote a pastiche once set in Burroughs Africa in which I gave mention to "Rogani the chimpazee," but that is only speculation; others have speculated that this species may not exist in Burroughs' Africa any more than the Mangani exist in ours. 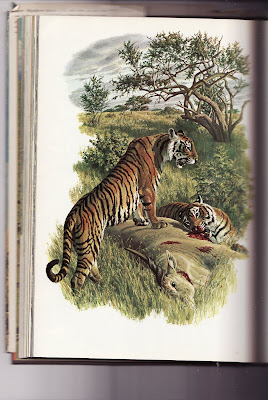 Then there is the matter of African tigers. In Tarzan of the Apes Burroughs intended the mangani term "Sabor" to refer to the tiger. It was originally a tiger, not a lioness, from whom Tarzan rescued Jane. This error may well exist in the origianl pulp publication. The only thing, of course, is that no tigers exist in Africa. Burroughs simply did not know this, so there was no intent on alternate world-building here. He corrected this error his later drafts, and the African tiger disapeared from Tarzan's Africa. This ommission may be, in general, for the better, as evidenced when Tarzan encounters a Sumatran tiger in Tarzan in the Foreign Legion. However, the possibility of African tigers remains enigmatic. Professor Louis Leakey, famous for his discover of mankind's ancestors, speculated that tigers did indeed once roam Africa's plains and jungles in his book Animals of East Africa. This book includes a fascinating chapter on the prehsitoric fauna of Olduvai Gorge, incuding pelorovis, a giant relative of the cape buffalo with sweeping horns, giant bison-sized pigs with four tusks, libitherium, an extinct girraffid crowned with antlers, giant baboons, elephant-like deinotherium, calictotheres---and Afria tigers. But were they truely tigers? Leakey writes that the skulls of lions and tigers appear virtually indentical, but when placed on a flat surface, the skull of a lion can be rocked back and foreward, while the skull of a tiger will remain flat. The "African tiger" skulls remain flat. However, Leakey cautions, "there exists no evidencd for he cat's striped coats." The jury appears to still be out on the existence of African tigers. But had Burroughs not corrected his error, Tarzan's Africa would be all the more identifibale as an alternate historical account.
Perhaps the most profound difference between ERB fictitious africa and our own is its apparent human history. Tarzan encounters many lost civilizations tucked away in its vast jungled reaches. This, in itself, indicates a far more extensive rainforest tha in our own world. Some of these lst colonies are from identifiable historical periods. The colonists ventured into the depths of Africa, put down their roots, and were subsequently cut off form their parent civilization. But other lost colonies-such as the warring cities of Athne and Cathne in the lost valley of Onthar--have a much more enigmatic origin. They resemble no known civilation from recorded history. What, then, do they represent? Opar is identified as a colony of lost Atlantis. But why are no native civilizations represented? Only Ashiar, which is possibly of Egyptian origin, would be a exception. Some might count the lost city of Ur, in the semi-pastice by Joe R. Landsdale, as canon, but other than it, no civilzation of subSaharan African origin exists. Burroughs invented the city of Ur, but never got around to describing it. In all likelyhood, it would have turned out to have been of near-Eastern origin, as its name indicates, not sub-Saharan African, as Joe Landsdale describes it (I really don't think the Landsdale portion of ths story should be considered canon, inventive and Burroughsian as it is). 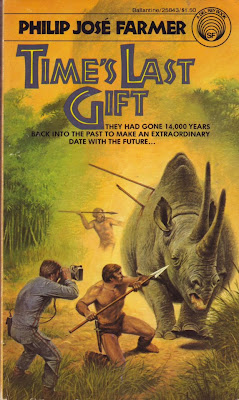 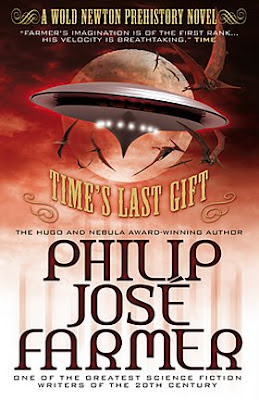 The fact is that the inhabitants of cities like Athne may, in fact, be of true African origin, only it is NOT the Africa of our own history. In The Eternal Savage, Burroughs discribes a fictional, prehistoric Africa inhaited by white prmitives and primeval monsters. Nu, the hero of the tale, is in fact, astonished that some of the inhabitiants of modern Africa are Black! In Phillip Jose' Farmer' Hadon of Ancient Opar novels, and in Time's Last Gift, he strongly suggests that Africa's first human inhabitants and original civilizations were white rather than black. So did history proceed on a radically different course in Burroughs' Africa? Farmer may not be canon, but one look at the Niocene Africa, with its Pellucidar-type fauna and humans idicates, the answer, at least in part, is yes.
Are there any thoughts on this?
Posted by Sweet One at 8:22 PM