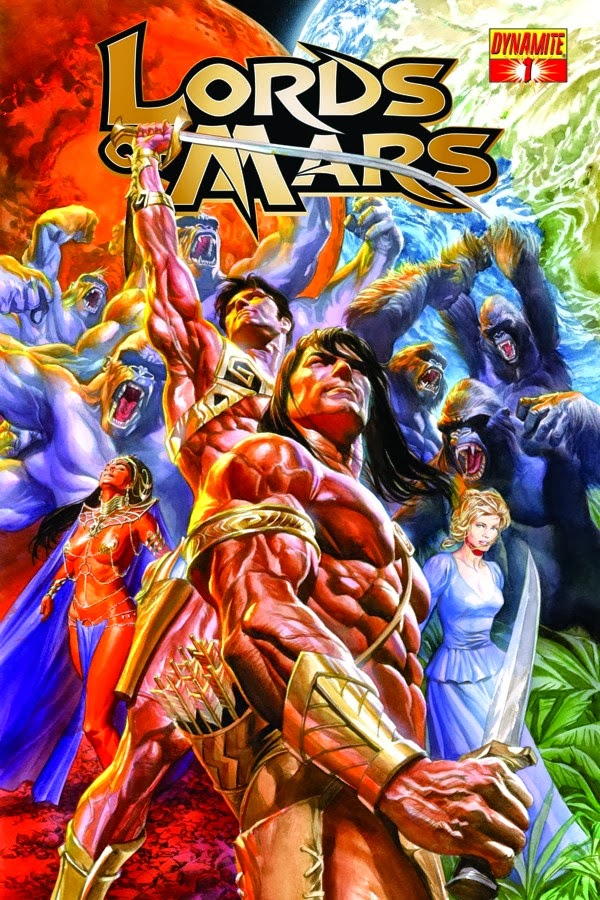 So far, the Dynamite's John Carter series, Warlord of Mars, seems to be doing well, though their recent Tarzan series predictably folded. Surprising, in light of the Disney film's reportedly dismal performance at the boxoffice. I thought of doing reviews of all these new series, though I have been very busy the last year, and haven't really had the time. Most people know there has been Gulliver of Mars crossover series, and separate Dejah Thoris series with very risqué artwork.

Mostly, my opinion is that these new series have been just okay, and sometimes slightly better than average. The artwork, in the main Warlord of Mars series, and the Tarzan series (called Lord of the Jungle--for some copyright-related reason?), has been tolerably old-school, yet still somehow not as much I could hope for.

Not the Dynamite's other series weren't worth reviewing, but this one merited some special comment.

Tarzan/JC of Mars crossovers have been done before, of course (something advanced publicity for the current series didn't mention), notably in John Bloodstone's pastiche-novel Tarzan on Mars, and the Dark Horse 90s comic series, Tarzan, John Carter: Warlords of Mars, which was written by Bruce Jones. I was one of the few fans who actually enjoyed that previous series, in spite of two unfortunate liberties that were taken with the source material. Bret Blevins artwork was what I would call authentic old-school.

As for the current series, there was an apparent setup in the final issue of Lord of the Jungle. In the issue before that, there was mention of some sort of monster lurking the depth of Opar. Tarzan initially refused to investigate, but this obviously changed in the final issue. I never saw that issue, but from reviews I read, there was a definite implication that this creature was a Barsoomian white ape, thus intentionally foreshadowing the current series.

Since none of the Tarzan/JC crossovers are authentically canon, this series assumes that the two heroes have never met before.  The story begins with Tarzan and Jane on a hunting expedition with some aristocracy who poke fun at Lord Greystoke's inability to shoot with a firearm. When they discover a poacher caught in a trap, Lord Marchmain attempts to have some "sport" with the injured man. Tarzan intervenes, and he and Jane end up on the run--but there's a strong suggestion that the whole incident has been a set-up, to what end, we do not yet know. Meanwhile, on planet NOT too far away (remember the Marvel comic ad?) John Carter is involved with a campaign to exterminate the White Apes of Mars. There is some questionable morality here, though it's uncertain just what position the authors have taken. The fact that the Therns are opposed to the slaughter (though for reasons more religious than ethical), seems to suggest the slaughter might be justified, a disturbing proposition.

In any event, Tarzan and Jane arrive on Mars, and Tarzan saves a pre-teen Thern prince from some pursuing Red Men, who allegedly are in the pay of John Carter. This is another set-up, and a fairly obvious one, this time by the Therns, who hope to rid themselves of JC by pitting one Burroughs icon against the other. The grossly fat leader of the Therns gives the Greystokes a warm welcome, and treats them royally, on the false pretense that Tarzan has saved his son's life, and feeds him a barrage of lies that John Carter is tyrannical oppressor, that a girl killed herself rather than be forced to become his concubine, etc. Obviously, all this sets up a coming showdown between our two heroes. What's surprising is how easily Tarzan himself is taken in by the villains. The Thern ruler is grossly corpulent, and often has a smirk on his face like he's laughing inwardly most of the time. Doesn't that set off warning bells? On the other hand, Jane remains suspicious of their hosts, and attempts to wran him, so far to no avail.

This me to suspect that there's some sort of feminist vibe going on here, and if so the series doesn't entirely part form political correctness.

Is that necessarily a bad thing? Well, if the male lead, in this case Tarzan is portrayed out of character, then to that end it is.  But hey, it's only the first two issues. And the story thus far promises a lot of action in the issues yet to come. Let's just hope ideology doesn't bog things down.