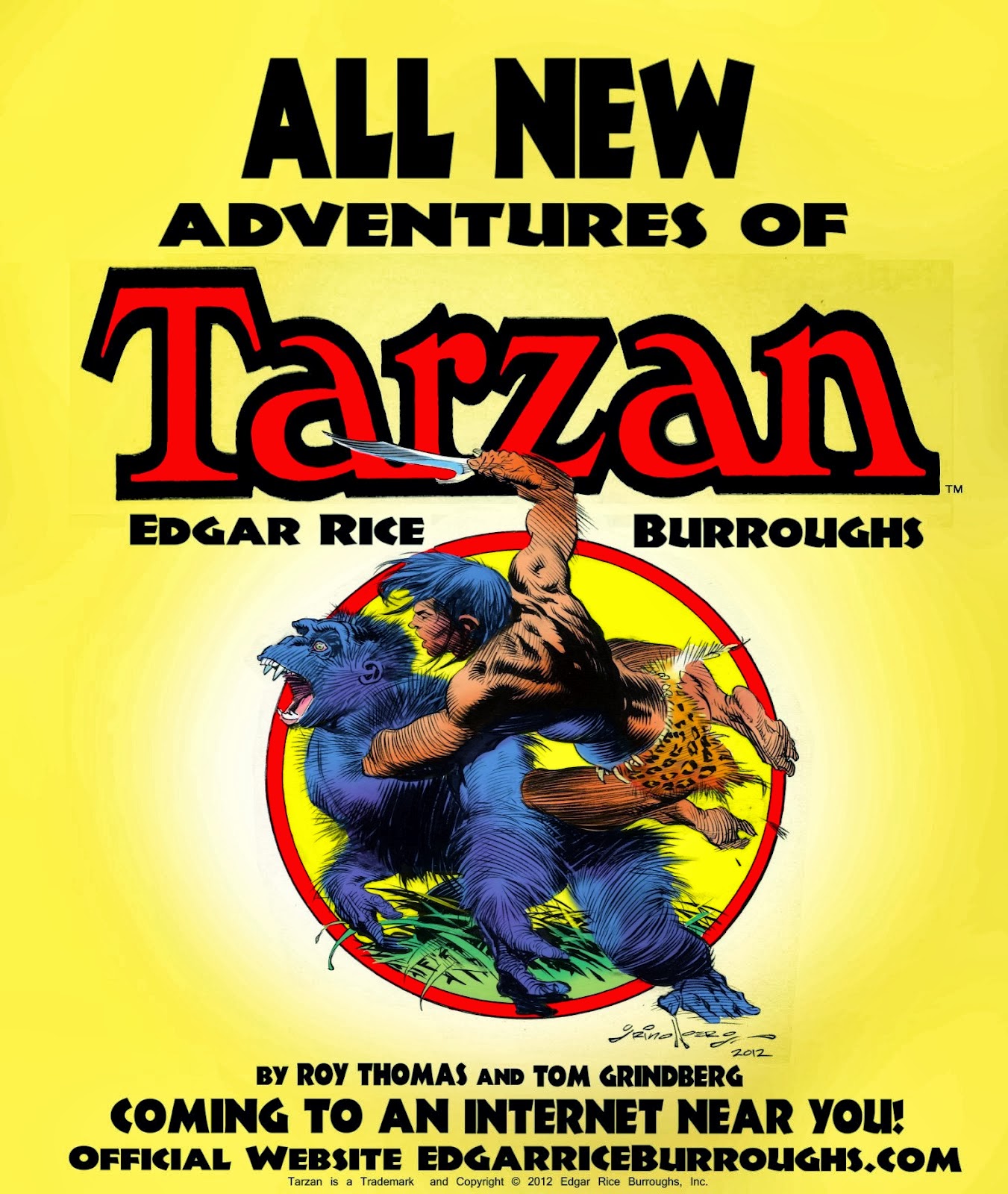 This past year, edgarriceburroughs.com has launched a number of online Burroughs-related strips. This is the first time in ages I've seen a body of work that is so clearly by the fans...for the fans. Something like what the ERB estate had planned for Burroughs characters back in the mid seventies right after DC's Tarzan series folded. Most notable among these strips is the All-New Adventures of Tarzan strip written Roy Thomas and drawn by Tom Grindberg.
The strip is not only good; the art is in the same league with Kubert and Manning. And the script also surpasses Thomas's own work on Marvel's Tarzan in the seventies. There is no attempt here to rehash the story of Tarzan's origin in an attempt to reboot the character for the new generation. That was basically what the recent Dynamite series was, and though some long-time fans were satisfied, that attempt ultimately didn't work. The art and script were fairly good, but the series was hyped as being the "uncensored version," when certain parts of the story were certainly "censored," such Tarzan's vengeful killing of Kulonga. This was merely the fact that it was an African happened to kill Tarzan's foster mother--it didn't reflect Burroughs' own attitudes on race, as Tarzan's later friendship was the Waziri demonstrates (Why, I often wonder is the clearly anti-racist message regarding the Pal-ul-don's warring pithacantropi tribes in Tarzan the Terrible never mentioned?) . Yet, the accusation of racism seems nearly unavoidable in dealing with Tarzan these days. There was also a race of near-human ape creatures, which were entirely absent in the original. They resembled somewhat the beast-men of Opar, but there was a suggestion that they might have been escapees from Pellucidar.
The Thomas/Grindberg strip simply plunges right into Tarzan's Africa. Though there is now a separate strip retelling Tarzan of the Apes, there's no real need to do that here. Refreshingly, it really does live up to its promise and presents an all-new, though very Burroughsian story, not an adaptation of a previous work. There are two main plotlines going on in this story, which are at this point becoming intertwined. One involves Tarzan and La of Opar. The other follows Jane and Paul D'Arnot, and their encounter with an ancient Trojan colony in the African fastness. This is the sort of adventure that I can see plastered on the pages of the color Sundays back in the day, or nowadays, had Tarzan's popularity continued on past the mid-seventies. In other words, it's a good old-fashioned Tarzan strip. The only drawback here is that it sometimes takes a long time for the individual strips to appear. Manning and the other classic artists were on a rush-schedule, though it did not diminish their quality. 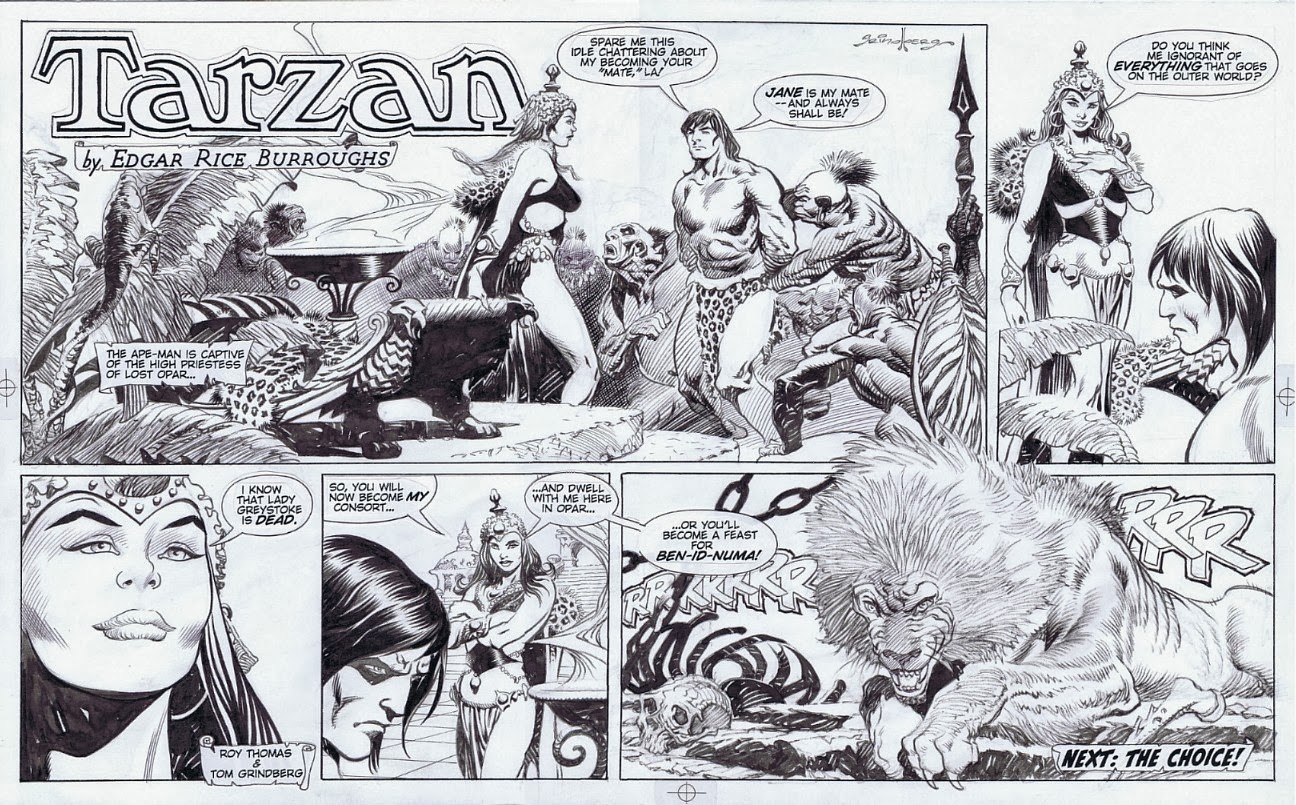 One more thing regarding the story itself; early in the story, there is a scene in La's palace in which La sics her pet--Ben-Id-Numa, the "Great Silver Lion,"-on Tarzan. Tarzan manages to slay the beast. La is mortified, claiming that she raied the lion from a cub, to which the ape-man replies "You doomed him, La!" One thinks La would have known better than to pit her lion against Tarzan--or perhaps (more likely) she expected what the outcome would be. Between Tarzan and her pet, she likely would have wanted Tarzan to survive the most. The scene is similar to an incident that occurred in one of Joe Kubert's Tarzan stories in the seventies, in which a vengeful Black queen pitted Tarzan against a jet black lion. In that case, Tarzan, or course, wins the battle, but manages to subdue the beast without killing him, and the two take on the Queen's warrior's togather. The lion, now Tarzan's companion, is eventually killed by a poacher, but his unique bloodline survived--but that's another story. In any event, I've posted before on the subject of exotic feline pelages. Genuine lions have been reported (and occasionally photoshopped), but never verified. Ditto with black tigers. Reports reddish lions and chocolate brown specimens have also been reported. But silver lions? None that I'm aware. But unusual color variants do undoubtedly occurr, including many that do not reach the eyes of zoologists. What would a "silver lion" look like, exactly? Grindberg makes Ben_Id Numa sort of a bluish gray with purple highlights--and in shadow the beast appears a deep rich purple, as you may see once you've subscribed.

Anyway, a great sight on the subject of strangely colored felids (as I might have posted before) is here: 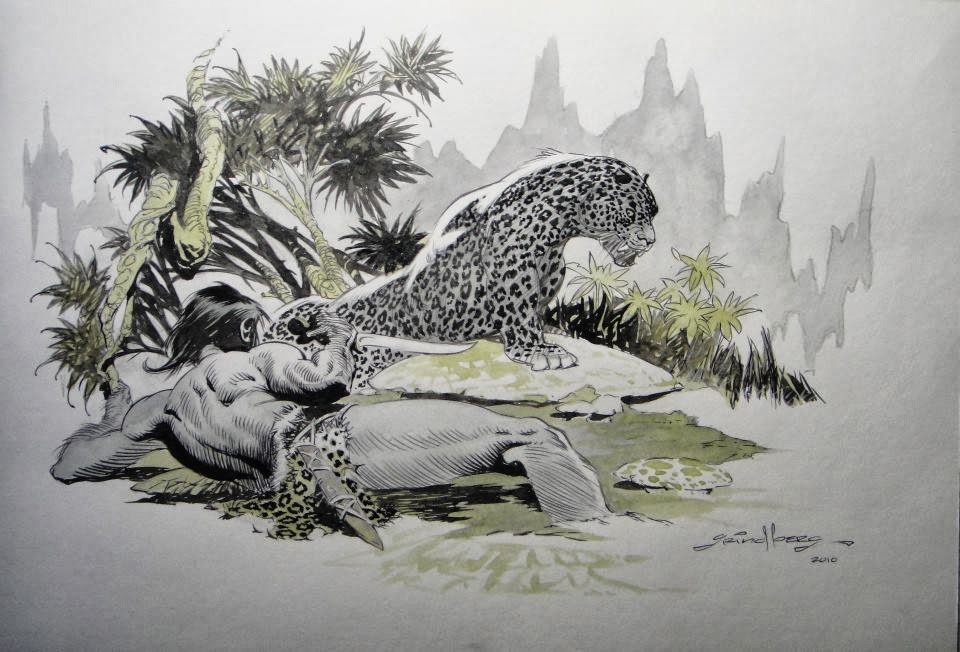