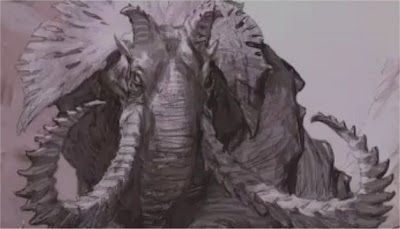 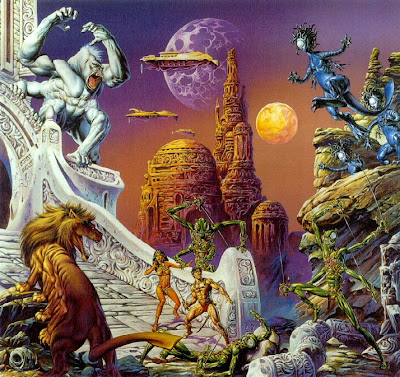 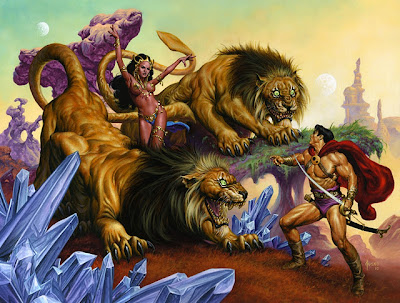 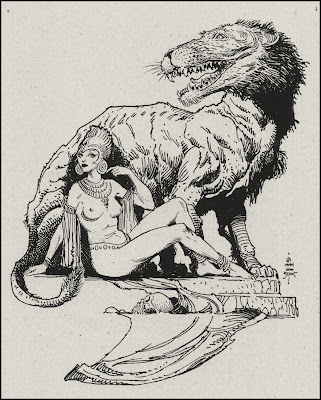 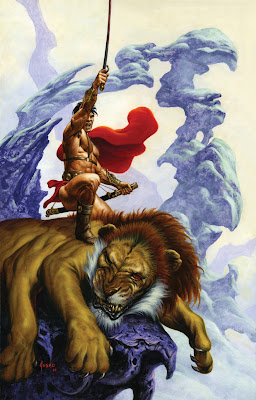 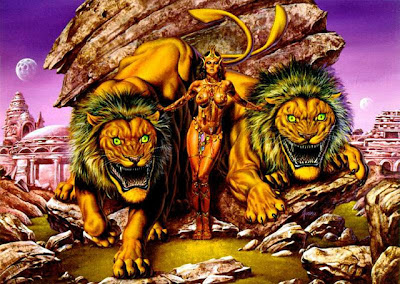 The banth is a ten-legged Barsoomian"lion." Of course, the banth is not a true lion, or member of the feline family. They naturally prey upon the thout, but anyanimal or being is a potential meal for the giant banth. Banths have protrubing green eyes, hairless bodies, and stiff-bristling manes. They are sleek in the manner of earthly felines. Their long jaws house a double row of hooked teeth, like the smaller calot, suggesting a common ancestry somewhere in the dim Barsoomian past. Obviously, it is a separate (non-feline) family of mammalian carnivores unique to Barsoom. All life-forms on the planet apparently began with ten legs; those with less evidently dispenesed with those limbs durng the long course of Barsoomian evolution. It may, in fact be mere comi coincidence that Earth's vertebrate lifeforms sport four limbs. Other six or more legged plans may exist throughout the universe. 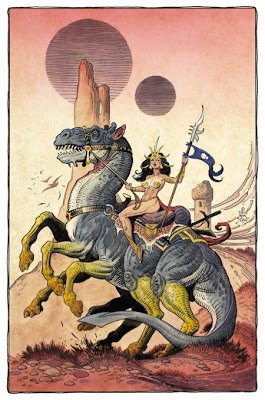 Thoats are eight-legged Barsoomian "horses." Again, they are not true equines, or related to anything else on earth. They are often vicious and foul-tempered, but the sentient Martian races can train them as steeds, and use them in gladatorial jousting. Their powerful legs sport great padded toes, the hoof never having evolved upon Mars. 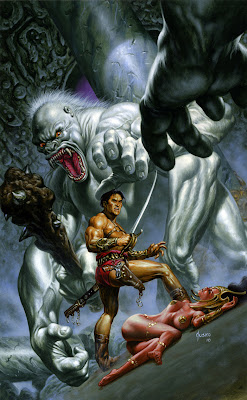 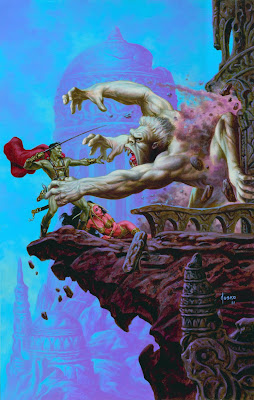 The monstrous white apes of Barsoom are an anomaly. They have the multiple limbs as the majority of other lifeforms indicating a common ancestry with all other life on the planet; however unlike the thoat, banth, and others, they apparently share the same family as the true primates of earth. John Carter even describes the face of the white ape as being strikingly similar to the African gorilla. So...why are primates represented both on Earth and on Mars? It seems very unlikely that identical families should evolve--but apparently, it happened. The copper-skinned humans of Mars are also primates, and though they lack an extra set of limbs, they share the same basic reproductive system with other Barsoomian lifeforms. The primate family it seems, is found throughout the ERBs universe on trillions of worlds. Tarzan was able to communicate with the first white ape he stumbled upon being attacked by a swarm of ulsios in Tarzan,Jahn Carter: Warlords of Mars: "I speak the language of all mangani!" Mangani must be a universal tongue among Burrouhgs' primates, even on distant worlds. White apes roam in bands throughout Barsoom, but especially are encountered among the ruins of abandoned cities. 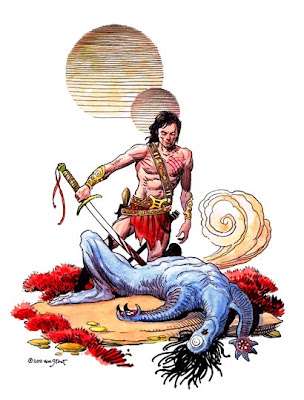 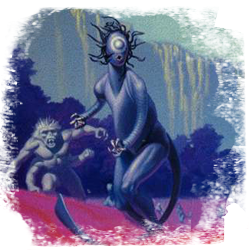 The bizarre "plant-men" of Barsoom are perhaps the wierdest lifeform to have evolved upon the planet's surface. They are virtually unique to the Valley Dor, the (dispointingly hellish) Martian version of heaven. Vaguely humanoid in outline, the plant-men are a nonsentient herding species. They perhaps are an example of a protist (kingdom of lifeforms that exhibit both plant and animal characteristics) that has developed into a large multi-cellular species. They sport a crop of angleworm-like tendrils for "hair,", a single, whitish eye that takes up their entire"face",a single nostril-like orfice for breathing, arm-like appendages which terminate in mouthlike orfices (through which the creatures graze), and massive, powerful tail. Their entire bodies are a weird, ghoulish blue color. Though they are "normal" four-limbed creatures, the plant-men have undoubtedly evolved along as separate trajectory then the other of Barsoomian species. 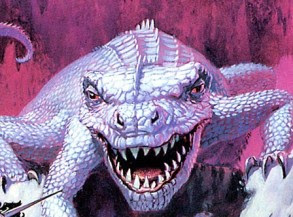 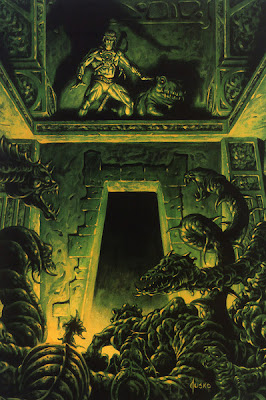 Reptiles on modern-day Mars are exceptionlly rare, though they were common during the planet's infancy, although whether the planet experienced a true Mesozoic era is unknown. And it is easy to understand why. Once Barsoom was warm and wet, with great oceans teaming with scaley life, and vast regions of rainforest. Creatures like the great albino cavern-dwelling lizard pictured above have lingered in forgotten pockets here and there, and are essentially prehistoric survivors. As monster's such as Pellucidar's zarith are generally considered extinct on Jasoom (Earth), surviving reptilian giants persist in realms such as Pal-ul-don and Caspak, as well as the inner earth. And so it is on Barsoom as well. John Carter noted a number of reptiles that bore resemblence to prehistoric fossil remains in the infamous pit of serpents. Like the mammals, Barsooms reptilian species (excluding serpents) sport multiple legs, indicating that reptiles gave rise to the mammals on Barsoom, just as they did upon earth. 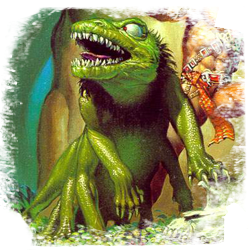 The calot is something of an equivalent of a Martian canine, as the banth has evolved paralel with the great cats. Calots chase down their prey on ten powerful stout legs, and latch onto it with their multiple rows of hooked teeth. Calots are often trained by the red and green Martians and are fiercely loyal, bonding with their owners after the same manner as earthly canines. The most famous calot is Woola, who remained loyal to Carter after saving him from a Martian ape. 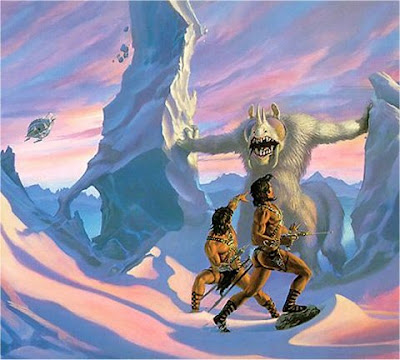 The apt is a monstrous, white-furred denizen of polar Mars. It sports six limbs, four o which carry it over the glaciers, the other two it can grasp prey with. It shead is described as something like the earthly hippopotomus (though the Whelan illusration above depicts it as a bit more rhinocerine), with mighty fanged jaws. Two horns of bone depend on either side of the great lower jaw. Its huge, insectasoid eyes encompass the majority of the apt's face. Each eye is composed o thousands of ocelli, all of which it can open or close independently and at will. 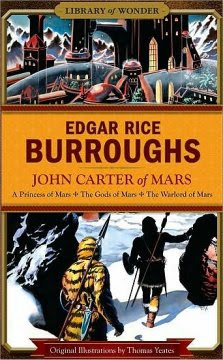 The orluk is another arctic monster, described as "a great elephantine beast of prey." it has yellow and black striped pelt. It conjurs up the image of a giant, furred, multi-legged carnivorous mammoth striped in gold and black. I could find no image (so far), but in the Thomas Yeates illustration above, some men appear to be clothed in orluk hides. 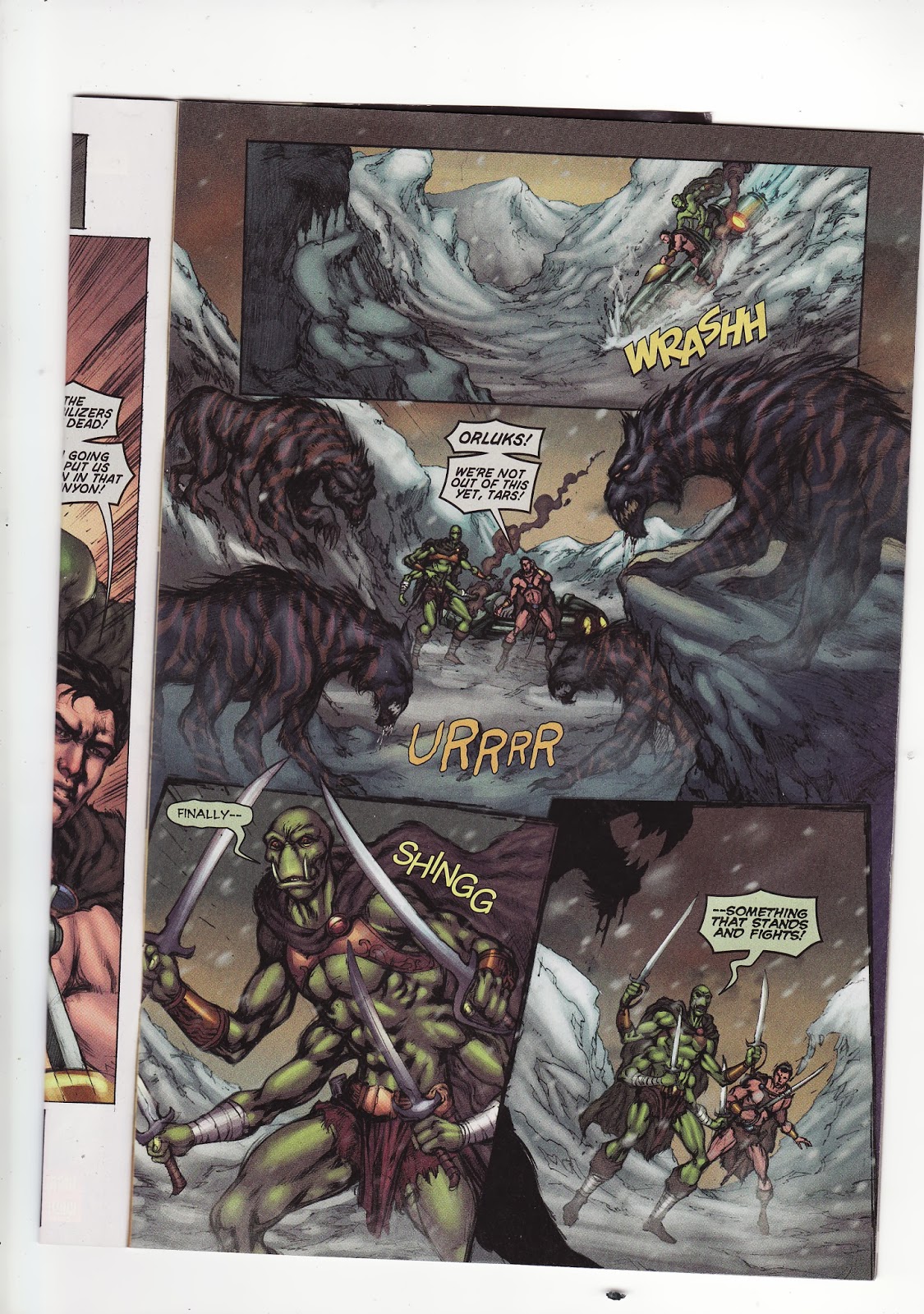 Update: Here is an actual drawing of an encounter with orluks at Barsoom's boreal pole. This from the new dynamite Warlord of Mars series, story arc "Savages of Barsoom." The beasts are striped, as they should be. But they should be yellow and black,and Burroughs describes them as "elephantine"suggesting that they may have sported trunks. Perhaps, though, he was merely referring to their size. 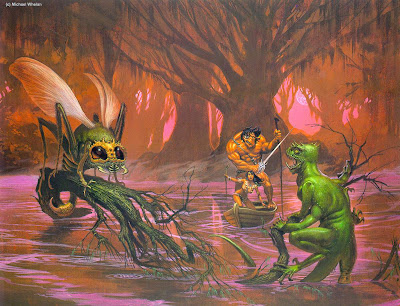 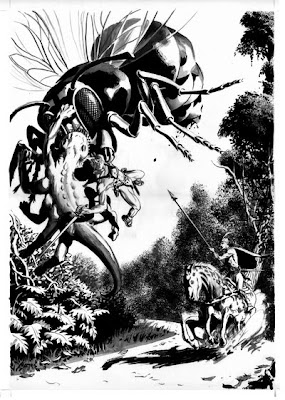 The sith is monstrous wasp-like insect-creature common to the Forest of Kabool, the size of a hereford bull. It has thrumming wings and deadly tail-stinger. The huge compund eyes are its one vulnerability. In the T. Yeates illustration above, Woola attack's this weakness, during his rows fangs deep into the eye. The insect in the Whelan painting may, in fact, be a related species native to the Tantolian marshes. 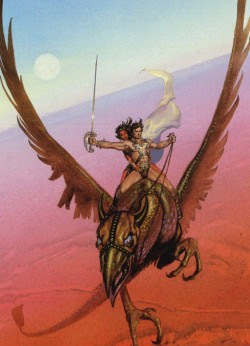 A giant, "prehistoric" Martian bird with a 40-ft wingspread. They are used as beasts of burden in the country surrounding the Tantolian Marshes. A relic from Barsoom's primeval past, the malagor combines features both avian and reptilian, much like the dinosaur ancestors of birds on earth. 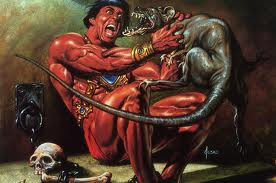 The ulsio is a repulsive scavenger found underneath barsoomian cities, rather like a large, mulilegged rodent. The term "ulsio" is not one of endearment. 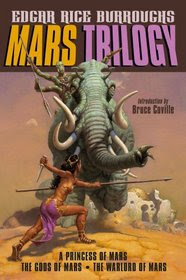 The zitidars are gigantic draft animals used by the red and green races of Barsoom. They are proboscidian in form, resmbling a Terran elephant or mastodon, though unrelated.

A small reptile with powers like the earthly chameleon.

A small six-legged mammalian carnivore kept as a pet by Barsoomians, and to kill small vermin. It is possibly a diminutive relative of the much larger banth. 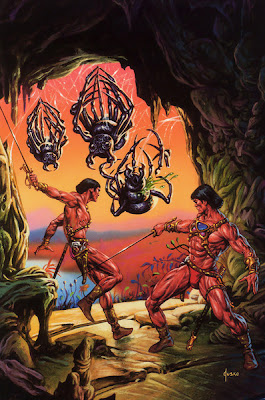 Monstrous, upside-down-hanging arachnids native to the jungles of the Valley of Ghasta.

Other animals have been added to the Barsoomian fauna in comics and pastiches, most notably in the DC comics Tarzan family series. There was a one-shot story called "Amazon of Barsoom," which told the story of Martain princess. A predatory lizard-beast is pillaging the eggs when th princess hatches. Before she is eaten herself she slays the creature with his own sword. The "cannibal lizard" seems more than a mere beast however, as he wears both a tunic and a sword with scabbard! Later the Amazon of the title saves her Jeddak father from the "demon apes of the misty caves." She slaughters the red-furred simians en masse, proving herself as worthy to her father as any son would have been. Now about those apes--now we have TWO primate species (other than the red, yellow, black-skinned humans) native to Mars! 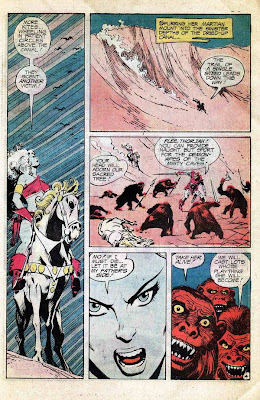 Another, separate, storyline involves a series of "lost journals" or John Carter. They are discovered in a trunk by a member of the aquatic Myopsian race (which are, in fact, native to Amtor (Venus), NOT Barsoom!

The first journal sees John Carter rescuing a beautiful princess who is trapped within a giant green gemstone. While searching for an implement to cut the crystal, he encounters a multi-legged styracosaurus-like beast that is unnamed in any of the canonical tales. The beast charges the gemstone, shattering it and freeing the princess. Carter then slays the beast with his sword. Later, the two are menaced by "the scavengers of Barsoom," flying reptiles which resemble three-headed pteranodons!

The "Amazon" story also shows flying reptiles which it refers to as "sky-kites."
Posted by Sweet One at 5:11 PM