Descent Into the Past 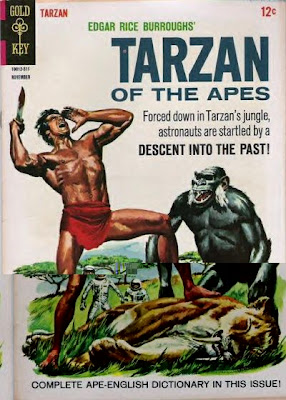 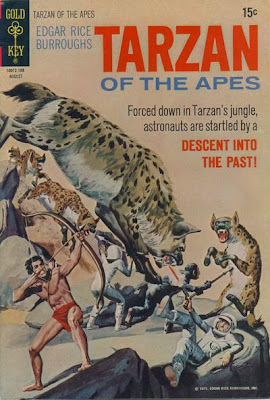 Edgar Rice Burroughs invented the lost worlds of Pal-ul-don, Pellucidar and Caspak. Tarzan visited all three (Caspak only once in the comics, thus non-canonical). But other prehistoric realms have featured occasionally in the Tarzan comics. There was a prehistoric world that existed just outside the elephant graveyard in a Hal Foster print, in which Tarzan encountered swarms of pterodactyls, a giant carnivorous saurian rather like a flesh-eating sauropod, called a "gigantosaurus," and a tryrannosaurus rex. In the Kubert DC comics, Tarzan encounters a lost realm deep in pymy country, where he encounters both a sabertooth tiger, and later on a strange survival from the dinosaur age, to whom the pygmies offer human sacrifice. 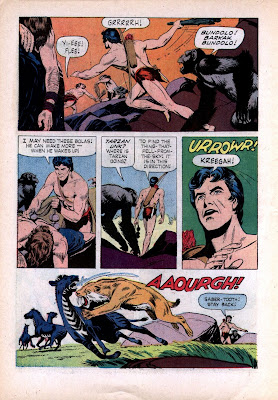 Then there is this Russ Manning illustrated comic story, published first during Tarzan's Dell comics run, and reprinted later when Dell became Gold Key, called Descent Into the Past. It has Tarzan venturing to a lost plateau were time his stood still for millions of years. A couple of astronauts land on the plateau in their space shuttle. It is up to Tarzan and his mangani freind Barkat to rescue the astronauts and lead them safely off the plateau.

Unlike most other lost worlds, Manning's lost plateau appears to harbor only mammals. There is not one dinosaur or prehistoric saurian to be seen, which indicates this particular lost land must have become isolated more recently then the others, sometime during the Cenozoic. 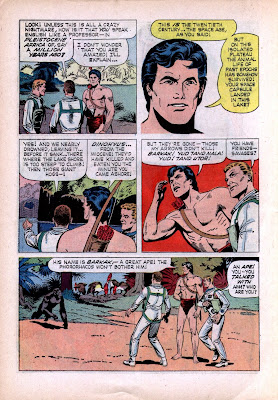 Tarzan says that the plateau represents Africa as it was a million years ago, but that is not quite right: most of the fauna he Barkat, and the astronauts ancounter is not African. There is the saber-tooth cat, whom is first seen attacking a herd of zebra-like horses. Tarzan and Barkat later slay the same beast or another of its kind. Though the saber-tooth dinofelis did indeed roam the African savannah of a million years ago, this species appears to be the more familair smilodon, which was indiginous only to the Americas. The phorohacas too, are strictly New World, as is the giant sloth. Both of these originated in South America. The dinohyus lived in North America during the Miocene, and other entelodonts ranged across Eurasia.
The Homo Eretcus-type hominids could be characterized as African, as humans first developed in Africa, then swept in and out of the continent on many separate waves. 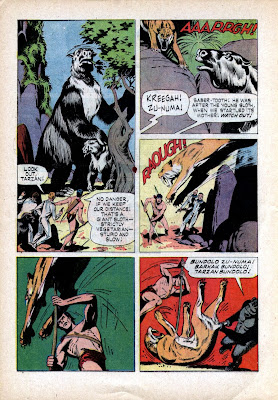 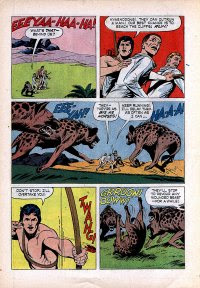 The hyenodons are perhaps the only distinctly African species, but here Manning makes an additional error. He depicts them as merely huge, preshitoric versions of the familiar spotted hyena (as he did also in one of his Pal-ul-don strips), and this is incorrect. Hyenodons were not ancestral to hyenas; nor were they ancestors of canines, as Burroughs himself depicted them in the Pellucidar books. Hyendons were creodonts, an entire family of carnivous mammals separate form all the modern canrivora. There were also many types of hyenodont, ranging from small, weasel-like species, to enormous brutes. In fact one species, hyenodon horridus, was indeed nearly horse-size (as one of the astronauts observes), and likly superficially resembled the modern hyena. To get a good idea of a hyenodon horridus, check out the "wargs" in Peter Jackson's Lord of the Rings Trilogy.

Anyway, it's a good comic. it would still be interesting for Tarzan to discover a lost world that si authentically African, with libatheriums, deinotherium, chalictotherium, pelorovis, African tigers, dinofelis, and of course, our own ancestor, Australopithicus Africanus.
Posted by Sweet One at 9:47 PM