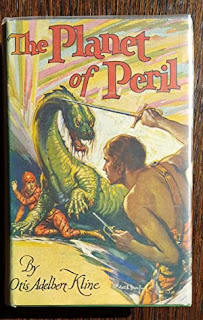 Otis Adelbert Kline has the distinction of being one of the few imitators of ERB whose works actually rank with the master himself. He was also one of the few to actually compete directly with Burroughs. He was the Linwood Vrooman Carter of his day, setting his sword-and-planet adventures on both Venus and Mars, in stories like "Planet of Peril," "Prince of Peril," "Port of Peril," and "Swordsman of Mars". There was even a single novel reminiscent of Burroughs' "Moon Maid," called "Maza of the Moon." The edition below is notable for its Frazetta cover, with its voluptous maid and flying iguana-beast: 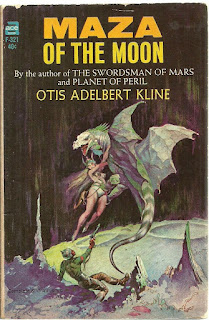 Unlike Lin Carter though, Kline had not one, but two imitation Tarzans, Jan of the Jungle and Tam, son of Tiger. Both were orphaned boys raised by beasts in the wilds of South America and India, respectively. At the beginning of Jan he narrowly escapes a very gruesome and disturbing fate at the hands of a mad scientist, who seeks a demented revenge on the boy's parents. Later, as a youth, the red-tressed Jan encounters a lost world, complete with an ancient civilized culture and prehistoric fauna, including domesticated. In this lost realm, Jan is forced to battle a brontornis, a type of phorushacas or terror Bird, in the local arena. 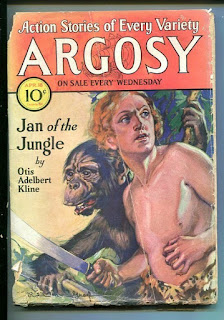 Tam, son of Tiger discovers another lost realm, this one beneath the surface of the earth, but one beneath a vast cavernous ceiling in northern India, a bit like Carter's Zanthodon. It is the inpiration of an underworld in Hindu myth, and inhabited by a race of sentient languer monkeys, and blue-skinned, four-armed giants out of legend, who ride balucotheriums as war-beasts, similar to the Waz-dons of Russ Manning's Pal-ul-don strips. The lost land is also inhabited by creatures from all prehistoric eras, including the giant carnivorous mammal Andrewsarchus, tyrannosaurus rex, and a species of ceratopsian dinosaur, that from a pulp illustration, looks very like an agathaumas, a hypothetical species that never existed, but did make its way into the 1920s film of Conan Doyle's The Lost World.

Since Kline's death, his Burroughs -type stories have since been reprinted in paperback. Some them, including his Jan and Tam stories, have been recently made available as facsimile reprints of the original pulps. Sometime in the 2000s, there was supposed to be an adaptation of one of OAK's Sword and Planet novels, but sadly, it never came to fruitation.

Sweet One
Before I said I was a recent convert, but I've been a Christian believer for years now. I've also been increasingly orthodox over the years since I first wrote on this blog, though I started out rather moderate. I am mostly of the school of C. S. Lewis, who was an inclusionist when it came to salvation, but also an anti-pluralist. Mostly what I write about is not religious, though. I grew up reading Ka-Zar Warlord and Connan comics, and reading Lin Carter novels, and the Dickens and Orczy movies directed by Clive Donner, and staring George C. Scott.