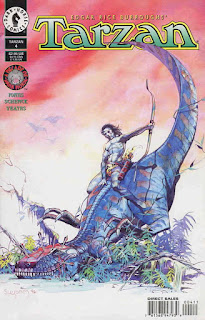 I already discussed this same tale years ago, in the post on Tarzan of the comics. But what I almost didn't think of , surprisingly, was how similar the concept behind Jones' particular story arc in the 90s Dark Horse is to Rosny's Ironcastle. When a pterosaur-like flying beast crashes a plane, the pilot (Paul D-Arnot? I really can't recall), says the was nothing like his experience, and asked if it could be an escapee from Pal-ul-don. Tarzan replies that they are far from the lost land, and that "this isn't thipdar flesh" (using the Pellucidar term for pterodactyl). I'm tempted to discuss here how the legendary Kongomatu might have come from a lost land, but never mind. So what is it?
Other beasts that indeed resemble dinosaurs, pterosaurs, or like nothing on earth are starting to pop up locally, in the modern Congo, and no one seems to know why.
Save perhaps the mysterious girl named Kita who claims she hails from one of Africa's lost cities. Tarzan at first believes her to be lying, having seen the Cities of Fala for himself, and knows them to be in ruin. 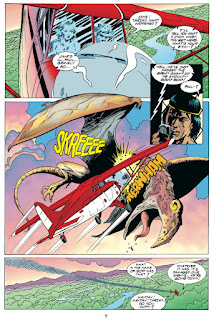 What they find though are the gleaming towers of a thriving civilization! Kita was telling the truth after all. After captures, escapes, and battles with mutants beasts, including a multilegged lioness and giant spider, they discover the truth: that Tarzan himself brought the spores of the Tara plant back from Barsoom. On its native world the tara plant was part of the Martian ecosystem: "The tara was eaten by the thoat, which was eaten by the banth, from whose droppings emerged again the tara." But on earth the tara has grown unchecked, having infected the local plant life, and altered the DNA of earth animals; some of them similar to those of the tara's home planet, such as the six-legged lioness. It's also revived Fala's ancient inhabitants, and allowed them to greatly augment their technology, possibly making Fala capable of conquering the world!

An alien spore affecting and taking over a foreign ecosystem, and mutating the flora and fauna.

Did this core concept originate with Rosny's Ironcastle, or is it just coincidence?

Sweet One
Before I said I was a recent convert, but I've been a Christian believer for years now. I've also been increasingly orthodox over the years since I first wrote on this blog, though I started out rather moderate. I am mostly of the school of C. S. Lewis, who was an inclusionist when it came to salvation, but also an anti-pluralist. Mostly what I write about is not religious, though. I grew up reading Ka-Zar Warlord and Connan comics, and reading Lin Carter novels, and the Dickens and Orczy movies directed by Clive Donner, and staring George C. Scott.